Ah, happy times.  In the past month, my MacBook Pro has been with the charming folks at Apple twice.  Granted in less time than I have owned my Mac, my Fujitsu laptop I had previously was dead.  So, no complaints.  Maybe I just got a dud, but I was in no rush after the death of the Fujitsu to replace it with another.  Hence, my conversion to the Mac World.

Anyway, the first to die was my hard drive and the cheesily named “Super Drive” (a cd/dvd drive to the rest of the world).  Yes, together.  Well, I think the Super Drive was trying to go for a bit but I use it so seldom I was ignoring it.  Anyway, I still have a year of Apple Care left.  I usually don’t do warranties, but on a laptop, it seemed prudent.  Sure enough, I win that gamble.  The Mac went off and came back seemingly better.  But less than a week later, I turned it on one evening, click, click, silence.  Pushed the power button again, click, click, silence…  And the next day, back to the Apple store I went.

Interestingly before it left, I had noticed it was running warmly.  Not blisteringly hot, but warm.  Considering the logic board, something to do with charging it, and I think another part or two, that may have been a symptom.  But I was looking the day before it died at new lapdesks.  My old plastic one was slowly giving up the ghost and I was never overly taken with it’s passive cooling design for the mac.  For my Fujitsu, the fans blew somewhat through the gullys in the plastic and I felt like it did cool it somewhat.  For the Mac, never seemed much cooler in it but kept me cool at least.

So, I found this neatly designed metal lapdesk.  My only complaints were no place for my mouse AND good heavens, $60 for a piece of metal!  It was an Aluminum iLap that I grant you has a few neat bells and whistles – little padded front and a long leg across the back similarly padded to keep it elevated.  Basically for a Macbook, which has a metal body as well, the thing is supposed to act as a big heat sink.  But $60 for the 15″ size, nowhere for my mouse, and what if it doesn’t even really work that well?

So, I started hunting for lesser priced yet still metal laptop stands and, I found precious little that differed in price, and previous little at all.  The longer I looked at it the more familiar the shape seemed to be, and it finally hit me, a cookie sheet!  Not the old fashioned type with the lip all the way around but the newer, thicker types that are supposed to keep cookies from burning. 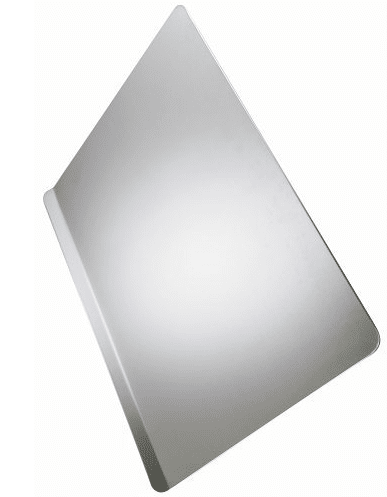 And sure enough, when I started hunting for cookie sheets, they could be had fairly cheaply, flat, double thickness.  And the little lip acts as sort of a bottom to the desk that my Mac rests against.  I’ve been using mine for several days now since it came back from Apple.  And it does seem to run a little cooler although, it could possibly be due to the repairs.  Or I could just be perceiving it that way.  Either way, $14 for the T-Fal AirBake Ultra Mega Cookie Sheet at Target sure beats the stuffing out of $60!  I figured if it fails to work out, I can make cookies!  LOL

Now, you could probably find it cheaper.  I saw cheaper ones with the lip on the short side, but for a small lap desk, that was just oriented in the wrong direction.  All my extra mousey type room would be at the back!   Still, if you shopped around more, you might find one like this a bit cheaper, but it wasn’t worth driving about for me to save what I’d spend on gas.

I’ve discovered it’s not a unique idea.  Others have gone this route as well, but I thought of it on my own, so I’m proud of my ghetto metal lap desk.  Sure, I don’t have the cushioned front bumper or a leg at the back to elevate it, but I could probably figure out something if I wanted to on those fronts!  So far, I think the slightly larger size is working out.  It gives me mouse room or room for my Bamboo tablet, etc.  And I think hypothetically the extra size would make for a larger heat sink to draw heat from the metal body of my MacBook.  And it was definitely A) cheaper than the iLap and B) cheaper and more durable than another plastic desk/lap desk like the one that has nearly bit the dust after nearly 5 years.

Now, think good thoughts for my Macbook not needing any more service ever!  Or if it does, make it in the next year before my warranty runs out!  Hopefully now that virtually everything inside it is new, I have a few years to go trouble free again.