I feel like I’ll be a hypocrite if I even gush a little over Facebook’s latest updates to their network, but I also really like them! Make no mistake, I’m not a fanboy of either company. It still makes me slightly nauseous to read people rant and rave over whether Google Plus or Facebook is the best thing since sliced bread! None-the-less, Facebook’s changes answer some of my gripes so I can’t let them escape without notice.

The first update to appear for me was subscriptions. In part, this simply allows you to follow people with whom you may not be friends. It will be interesting to see how this feature evolves for many of the individuals like me who previously created pages for people to follow our work. Make no mistake, large brands like say Amazon are still going to want pages to interact with the public. For one thing, it’s a entirely a brand not a person. When person Y who has handled their page leaves, their “fan base” will remain with the company. Companies are unquestionably brands but many artists of both the visual and musical world may be better served just allowing people to see their public posts by subscribing to their normal profile. I’m not ready to guess which way that will go, but I have hedged my bets by opening up my personal profile for subscriptions for those interested.

But I think the more interesting part of subscriptions is that you are subscribed by default to all your friends and you now have additional tools to decide what you see from each friend, etc. Check out this menu (accessible either from the stream or on your friend’s profile): 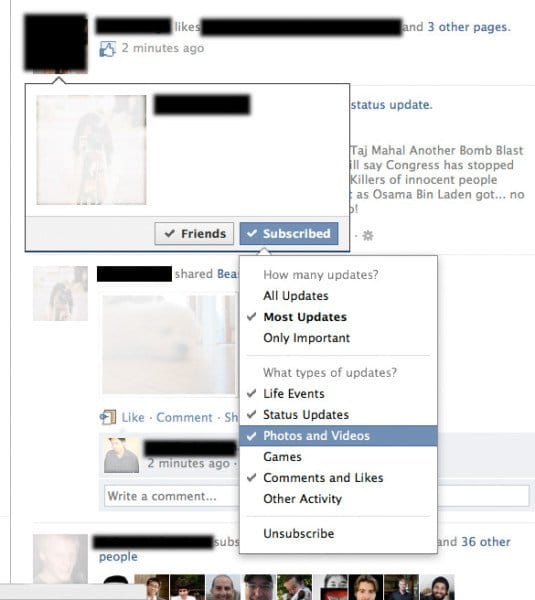 First off, notice something I’ve unchecked – games! I wish I could find a blanket option for this, but none-the-less, if game updates bother you and you have friends who love them, you can at least unsubscribe from their game updates rather than having to block each new game they find. I know I can get a few hallelujahs out there! You can also pick and choose whether you want to see the photos they are posting, etc.  I personally can’t think of a use for that, but some one out there may have a friend from which they never want to see another shared photo. And notice the top part of that menu – where you can decide how much or how little you see from your connections. Facebook describes those as follows:

I was excited for just those changes, but they’ve also added smart lists. In general, I’m not into the idea of Facebook deciding who is on my lists. I’ve used the list functions for ages to decide who I’m sharing what with since I have friends with a wide array of interests, etc. So, when I first heard Facebook was going to create lists that would be pre-populated, I was non-plussed. And I’m still not overly excited about their choices. Family is obvious, they’ve picked the family members I’ve already connected with as family. And they have a lot of “suggestions” for that list that are not remotely correct. And they have suggestions for the “close friends” list that aren’t that accurate, but they’ve made it easy to add people to those lists. And the coolest thing is if you add people to the close friends list, you get notified for all of their activity (you can turn this off if you want). I like that change! There’s also a smart list of nearby friends – the neat thing is its based off a radius tool and you decide how far out it reaches to include people in that list. It does depend on your friends setting the city where they live. And of course you can still create your own lists and use them as before to filter your newsfeed.

That last item, I rarely used in the past. I thought I would when I set up my lists, but I discovered I used it to pick the audience but rarely narrowed my feed using it. The only reason I may change that behavior is the slickest add-on to the lists function. If you are viewing a smart list or one of your own lists in the newsfeed, the status box is pre-set to share with just those people. So, for instance, if I’m looking at only the updates of the people in my close friends list, and I click to send out a status update, it will just go to those people:

As I said, I have long (believe it or not)  targeted my status updates and the items I shared, but this is much less clunky to be able to just click on the list in the left column and send my update straight to the intended group!

A reaction to Google Plus? Possibly – if so, awesome, keep up the competition guys! It seems hard to imagine them pulling these changes out of their hats in the couple of months since Google Plus hit the scene, but if that’s so kudos to the geeks at Facebook doing all that coding so quickly.