Care and Feeding for your Social Network

Home » Technology » Care and Feeding for your Social Network
Technology
Share This:

Wow, I watched F8 today and really look forward to playing more with the Timeline feature and seeing what’s possible with the new open graph. I like the idea that you can more than like media now, for instance, someone could look at one of my prints and click want and their friends would know they want it. The verb makes a difference. I wonder if we’ll see drop down menus where the user can choose like, love, want??

Anyway, the topic of this post was more about the earlier changes this week, the re-design of the timeline and specifically about the power of lists now that Facebook has finally embraced them! I’ve said before that I have used lists to choose my audience, but I’ve discovered lists can create an almost newspaper-like experience online. I know newspapers will sound terribly out-dated to some, but I personally enjoy reading a topic not jumping from topic to topic and newspapers were typically organized by subject, sports section, arts and entertainment, national news, etc. You can create this same experience on Facebook now.

I’ve had this conversation with a few people now so I suddenly realized that others hadn’t picked up on the fact that lists are for more than just your friends. Facebook released smart lists with an emphasis on lists that are based on who you pick as your closest friends, workplaces, schools, or geography, but you can also create custom lists of your own and in those custom lists, you can include people who you’ve subscribed to, Facebook Pages you’ve liked and your friends. I personally haven’t overlapped all three in my lists, but nothing is saying you might not have your own unique reason to do that!

Why would I bother you might be wondering, well, I for one have followed a lot of artists and photographers and bands and a multitude of pages that cover the things that interest me. Before, that was a fire-hose of information, my main newsfeed is packed with status updates from friends, photos and pictures from artists, bands letting me know their latest album is out, etc. It’s a lot to digest at once. Now, I’ve started creating lists of say all the photographers I follow. I’ve compiled their pages into one list and then when I want to see what’s new, I can click on that list in the left-hand column and see what they’re posting. It’s almost like having an arts section to a newspaper.

So, a quick, how to on making your own custom lists: 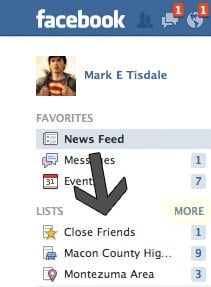 On the next screen, at the top of all your existing lists (including the ones Facebook has built-in), you’ll see the following create a list button – click it!

The next item will be a pop-up asking you to name your list – this can be anything but you’d want it to be relevant so you’ll know what you’re clicking on later. So, if it’s a list of your favorite photographers or your favorite football news, name it accordingly so you can find it later.

And then you’ll have a blank slate, a list with no people or pages within, it feels lonely, so you need to click add friends to populate it – I think Facebook could change this text to make it clearer that it’s not just friends that you can add to a list. 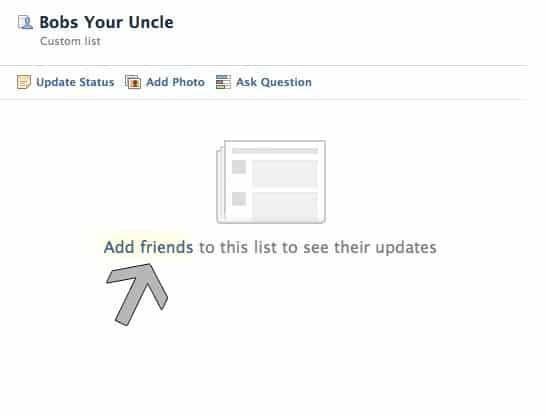 After that this large dialogue will come up with icons and your friend’s name. at this point, you can use the drop down list at the upper left to choose between Friends, Pages or Subscriptions – click the ones you want to include and they’ll become highlighted with a check mark in the corner to indicate they’ve been selected.  And as I mentioned, you can mix and match, I could click on a few pages, and then swap to subscriptions (or friends) and select a few more, it will include all the selections you make from each category. Then click done and you’ll have a shiny new list in your left hand column. When you click on it later, you’ll see the updates, pictures, links, etc. that the people and pages in those lists have shared with you. 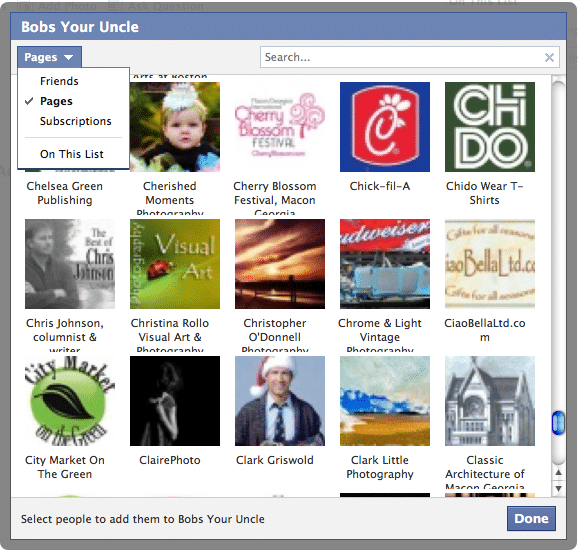 I admit, it’s a lot of work when you’ve followed more than a few pages, but I’ve thoroughly enjoyed reading my similar themed posts all at once instead of hopping from subject to subject. But in the end, it creates a really clean and nice experience for you when you come to check what’s new on Facebook.

I haven’t used this nearly as much with my friends. Individual people are not nearly so easy to quantify. In a day, I might post a photo I edited, a song I enjoyed or an article I read. Putting me into a list wouldn’t be topical and that’s, I think, pretty par for the course for people. Maybe at some point Facebook will create (or allow users to create) topical lists that are shared rather than one-sided. As it exists now, just because I have a list of friends who like sports for instance, and I share a sports article with them, it doesn’t mean they have me in a sports list and even if they did, when they looked at it, they’d see everything I shared with them regardless of topic. It’s a one sided show right now. But for those outlets you follow that are topical, give lists a try and curate your own news!

FYI, this is primarily aimed at Facebook, but circles on Google Plus could behave in a similar fashion. However, right now, the people you are circling on Google Plus are just that, people – not brands. You see whatever they share with you regardless of subject. If you find people who are very topical i.e. always share the same type of information, they’d be prime candidates for topical circles for your reading pleasure.