In case you were wondering, this is an excellent illustration of what I don’t like about Twitter and it’s cousin, Google Plus. 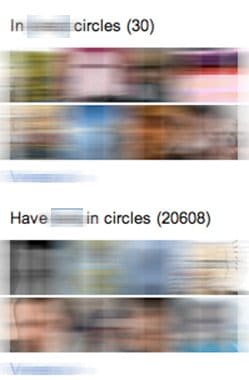 If you’re wondering what you’re looking at, it’s not a piece of strange art but an anonymous screenshot for someone who uncircled me this evening on G+. In this person’s circles, 30 people (more on that in a second). People who have this person in their circles, over 20k! This isn’t some minor celebrity or some such who has beaucoup people interested in what they’re saying, this is someone playing a very calculated game. I’ve seen it on Twitter, where I admit I have only ever been marginally active and I’m seeing it more and more on G+.

Now as to that 30 people they’re following, that count could mean anything. G+ gives you the power to choose what “circle” you display there, so that could be 30 people who are actual friends or even 30 random people just to give the newly circled a feeling of being invited inside a cool club, but almost certainly not the people who are unwittingly a part of their game.

The game is a variation on one of those lovely high school games, the popularity contest. This is someone who for either Spammy reasons or low self esteem wants to have tons of people following them. Some people play this game and at least keep you amongst their followers afterward (although they likely never look at what you share). I’d still rather not be weighed down with people who have no actual interest in what I’m sharing but I’ll take a little tit for tat over this variety. This variety drops you in a New York minute after you’ve followed them. As designed, neither Twitter nor G+ let you know when that happens, so unless you’re following a few people, it might be awhile or never before you figure that part of the game out.  And like this one it’s often someone with thousands of followers, so they are playing the game quite well!

When I first joined G+, I looked at the profile for each person who followed me to decide if I wanted I follow them back, to get an idea what exactly they were about. I finally hit a point where this was all I did when I had time to check out G+. Phase two went into effect, everyone who follows me goes into a circle that I’ll look in on occasion and see what they are sharing, but only people who actually interact with me on a level beyond that  get elevated into a circle I routinely monitor. Think of it as triage for social networking. For now it’ll continue but eventually I either hit G+’s cap or I get tired of the games and only people who actually interact get invited inside.

I haven’t seen this yet on Facebook even since “subscribing” has become available. I’m sure it will happen (if it doesn’t already), but I think right now it’s not happening a lot simply because it’s too difficult to find people to subscribe to. Most of the suggestions are based on people to which your actual friends are subscribed. By contrast, Google Plus will currently offer me over 500 people to quickly circle on the find people screen. And each time you add connections, you’ll get more suggestions based on those additional people. It’s easy-peasey to select them all and continue to balloon your circles from there.

Only tangentially related, but here’s my favorite G+ gaffe of the day. I was politely dropped by someone who then made a public post that they had winnowed down the 4,000 people they were following to a smaller group of people posting quality content. I have a feeling (or at least hope) that the slight was unintentional, but here’s a note for would-be social media folks on G+, just because you dropped us doesn’t mean we’ve dropped you. If you post something like that and choose an audience beyond your own circles, it comes to our stream and we’re made aware we were not part of the chosen. Of course it’s the snarky “quality content” that most bothered me. Fine, you were following 4,000 people, that’s a lot. I can totally understand you needed to either reduce that number or find some way to divide your circles so that they were more manageable, but that was a subjective decision. No one made you the judge of quality, rather you made a choice based on what you personally enjoyed. I’m sorry my work fell outside that realm for you but I don’t want to waste either of our time, so bon voyage and best of luck! I guess this is my secret letter to that person. Ha!

Ah, a rant off my chest! I’ve been holding in that first one for awhile now. It annoys me when people waste my time. It takes away a lot of the enjoyment of sharing my work online, so I hope Karma gets them all!