Duck Duck Go As A Verb?

I have no idea how many years I’ve been using Google as my default search engine. We’re certainly in the borderland of 10 years if not beyond. You know Google is dominant considering we use it as a verb these days, i.e. I don’t know the answer, but I’ll google it!

Lately though I’ve been more and more disappointed with Google’s search results. Hoards of junky results abound for any search and the part that has really annoyed me more and more lately was that used to if I added words or terms, Google would use those extra terms to make my results better, i.e. additional words refined my results. Of late, Google has begun to make more and more assumptions with the search results. If you add a word, they  may disregard others. Apparently based on a recent lifehacker post, most people didn’t realize you could throw a + in front of a word or phrase to require it in the results. That had become a favorite trick of mine to force the search engine to listen to me. Well, the in past week, when I did that, I started getting a message that they were disregarding the + (no doubt a casualty of the new social network using the symbol in its name). If you wanted to force a word or term to be included, you’d need to use quotation marks as you would around a phrase previously. And as far as I can tell, that doesn’t really work. Before if I told it +cat then any result had that term, quotes don’t seem to function the same as far as I can tell. Annoying…

Couple that with a slightly tinfoil hat feeling of having too much of my life in one company’s basket, I’ve started trying out other search engines. Google already hosts my email which is a massive window into my life. With G+, they have a little more, and they know what I’m searching for too. Considering I’m already unhappy with the results of those searches, it’s dead simple that I should see if I can uncouple my internet searches from Google’s train.

So far I’ve tried two. I tried Bing for several days. And I found it was decent but periodically, I found myself returning to Google because I couldn’t quite find whatever it was I might be searching. Bing isn’t awful, but if you’re halfway used to being a power searcher, the type of person your friends turn to in order to find something, then based on my short stay, I don’t think Bing is your google replacement. I had a hard time refining my results but for a typical simple search, a good answer was usually on page one. 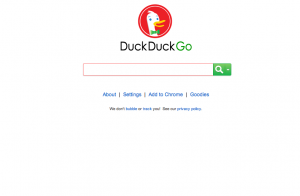 The past two days I’ve been trying another search engine, Duck Duck Go! The name is memorable at least! After a few tries, I went ahead and made it the default engine for my browser. I can’t say it’s not in a trial phase, but so far, I’m liking that Duck Duck Go doesn’t seem to ignore my search terms because it thinks maybe the first term wasn’t as important as the last two. I miss the google that thought I knew what I wanted. And I fear that’s going to get worse as they start using Google Pluses to decide which links are more important.

I’ll try to post back when I’ve had more experience with Duck Duck Go, but so far, I’m feeling a good vibe.