Amongst my many offbeat day dreams is doing just what this couple has done, convert a school bus into a home. There are whole communities online centered around bus conversions, and while many are creating their own custom RV’s, I’ve stumbled across more than a few who are using school buses as the base upon which to build a home. 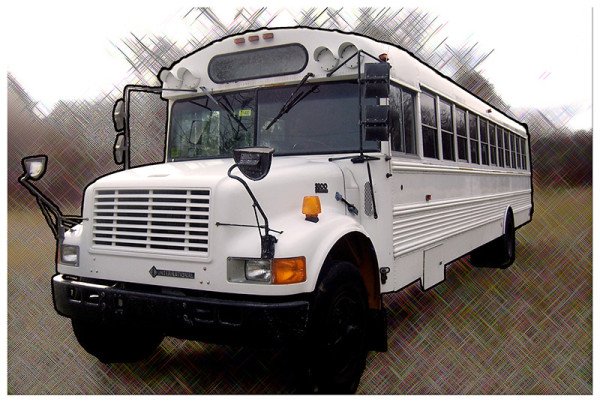 The results are as varied as any home would be but I was personally quite taken with how Chaldea and Phil have outfitted their bus. Looking at the photos on their blog, it feels very “homey” – absolutely a place I’d like to call home myself. I liked it so much that several days after discovering their blog and leaving a nice comment, I returned and reached out to see if they’d be interested in doing some sort of guest post or interview so that others could discover their story and see their really cool bus home. Thus, what follows is a first for this site!

I’m borrowing their intro from their blog to introduce them further to you:

Chaldea is an organic vegetable farmer, banjo player, illustrator, and crafter. Phil is a lacto-fermenter, builder of many things, drummer, and vegan baker. We bought a school bus and we are turning it into a home for ourselves! These are the stories about it!

What led you to choose to convert a bus into a home? Was there something/someone that influenced the decision?

Chaldea: I have been interested in the idea of living in a converted vehicle home since several years ago when I was traveling in Ireland and I stayed in a little caravan for a few weeks. During that visit I met a guy who traveled around in an ambulance converted into a camper, and another guy who was turning a huge horse trailer into a beautiful log cabin-like home for his wife and baby. I had never seen anything like this and I was so inspired. Then a year later a friend of mine converted a school bus into a home with her boyfriend, and I really wanted one of my own. When I met Phil and found out that he had always wanted to own a bus, it just made so much sense for us to do it together.

Phil: For me the idea of owning a bus came to me in high school, more as a utility/band vehicle than as a home. It has only been in the past few years, learning about sustainable living and alternative structures, that I began thinking about the possibilities of a bus/rv conversion. I think acquiring the skill-sets necessary to complete this project in the past few years allowed me to make it a reality (not to say that someone without building experience couldn’t figure this out with all the books available, we certainly used them extensively). The major event that precipitated the conversion was requiring a home structure to place on a farm property which was not our own. 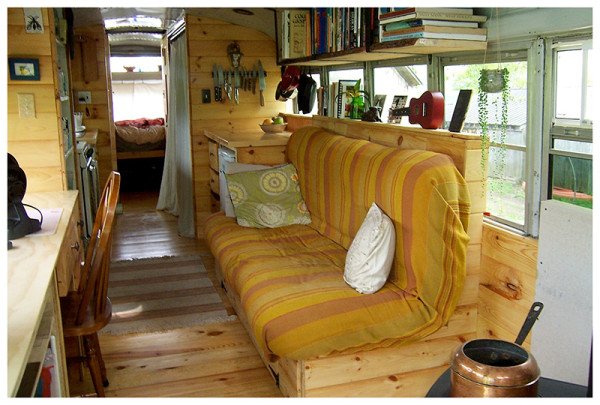 Is this part of a history of unconventional choices or the beginning of it?

Chaldea: I think I’ve pretty much always been unconventional.

Phil: The conversion project has, in some ways, only begun my exploration into different ways of thinking about how to live. However, that being said I wouldn’t say I’ve been a ‘conventional’ thinker thus-far in my adult life either. This is just a step towards figuring out a responsible way to exist.

What’s been the best thing about your new lifestyle?

Chaldea: We are home owners and we don’t have to pay a mortgage! And I love showing it off to everyone too. I work with kids, and they are always asking, “Can I see your bus?” That is so awesome! It makes me proud, and I feel like I am showing them that there isn’t just one right way to do something.

Phil: I really enjoy owning my living space, while not having the burden of full-fledged property ownership right yet. Not having to think about rent payments and having the experience of caring for a space in a way I haven’t had to (renting, etc) has been really exciting. Also, custom-building the space has really allowed me to fulfill my needs in a way that hasn’t been met before in other living spaces I’ve had. (book shelving, paper flat-file for art, etc.)

And what’s been the worst thing?

Chaldea: Not having enough floor space to do yoga, but we haven’t lived in it through a winter yet, so the cold nights might end up being the worst thing. I’ll have to get back to you in February.

Phil: Dealing with registration and insurance was a bit of a nightmare. Regarding tangible living space issues, the hardest thing for me to deal with is when something doesn’t work how I’d like it to. Having never built furniture or cabinets, I’ll be revisiting and improving designs which aren’t satisfactory, the futon in particular.

And what’s been the most unexpected thing?

Chaldea: Knowing that I can live in a tiny space and feel so comfortable.

Phil: I’ve been sleeping pretty well. The enclosed space of the bedroom seems to promote a good night’s sleep. 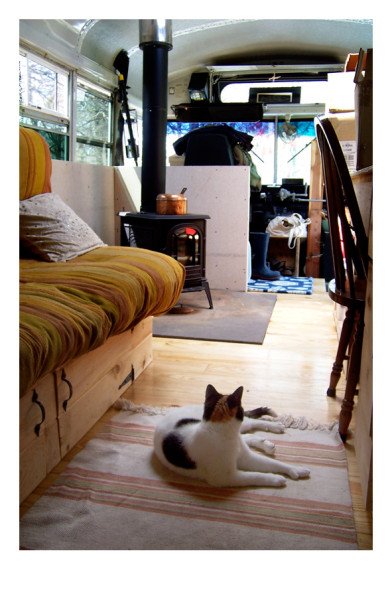 Do you have any long range plans you’d like to share, particularly any of an unconventional nature, i.e. is your bus conversion part of a bigger plan for your life?

Chaldea: I think in reality, living in the bus home is a short-term thing, maybe a couple years, since I do want to own a house and have my own land someday. But I always daydream about the future house being a tree house, or converted boat on land, or double-decker bus home, things like that. And during the whole project, whenever we saw something we wished we did differently, we would half jokingly say, “Well this is only the first bus.”

Phil: The bus will remain a part of our lives in some way, I’m sure, for quite some time. I’d like to take it on any number of trips, but for the time being it’s a full-time residence. Regarding the longevity of its use, ideally this will serve as a home base as we segue to building a house on some land when we decide to take that step. Other unconventional life plans are up in the air, my attitude towards the future at this point is that it’s ok not to know what comes next, which may be unconventional in itself. The future could hold a homestead farm, a total career change, or any number of other pathways. I think the bus fits into this puzzle quite nicely. In general, if nothing else, this conversion has been an excellent learning experience; every building project is a puzzle of sorts, and this one presented new and exciting issues that I hadn’t encountered with conventional structures. At the least, we’ll take what we’ve learned with us as we build our next home.

What do you think people considering following in your footsteps should know before they jump in?

Chaldea: I guess it goes without saying if you’re doing this kind of thing, but, have an open mind. Anything can be anything else. Be creative and use reclaimed materials in a new way. I watched dozens of how-to-build-a shower videos and then we ended up making ours completely different from any conventional shower. And it works great! Also, talk to everyone about your project before you start, and as you are doing it. You’ll be surprised by how many people have building materials lying around that they’re willing to donate, and possibly help you with the building too.

Phil: It’s important to have the big picture before you get started. If there’s one thing I’ve learned from the building projects I’ve done it’s that there’s always unexpected issues, and thoroughly evaluating all the angles of the project (budget, materials, floor plans, etc.) before you get involved is helpful. That being said, we did just a couple months of research before we purchased the bus. We constantly prowled numerous Craigslist areas for materials and appliances, which was helpful in keeping costs at a minimum. Also, I would highly recommend books like The Bus Converter’s Bible, Select and Convert Your Bus into a Mobile Home on a Shoe-String, Bus Conversion Floor Plans, and Plumbing for Bus Nuts, which helped to get the ideas flowing about certain aspects of the building project before we went ahead with the bus purchase. This allowed us to come up with ballpark estimates of materials costs in advance to see what was possible. Also, by reading other blogs and accounts on Skoolie.net I also learned useful tips and tricks for making things go easier (for example, laying out the floor plan in painter’s tape and living in the bus for a bit to get the feel of how the space will work before committing to it). Regarding unexpected issues, one area I had not budgeted for was tools; if you have friends with tools you can borrow, great! If not, you’ll be spending a sobering amount of cash on power tools. I found, in particular, that a good impact driver, angle grinder, and compressor/nail gun combo were indispensible to have around and I now consider them to be an investment (don’t buy cheap tools, they’ll break on you when you need them most!). Had I planned very carefully, I may have been able to get away with renting certain items rather than buying, but felt that in the long run I wanted to own them for subsequent building projects. I could go on and on, but I think the theme here is to do your homework.

Phil: As with anything in your life, I think my thoughts for people doing this are to be as fully engaged in the process as possible, and above all, to enjoy yourself. It will make the finished product all that much better. This is a total adventure, and especially if you’re not working with time constraints, take the opportunity to find awesome materials and fully develop your ideas for what this conversion could be. Anything is possible. I’m continually excited to see what people are doing with school buses, and I hope that people who see ours will be inspired to take their own to the next level. 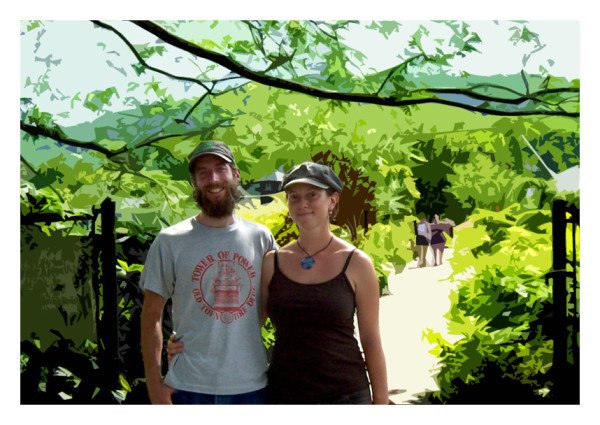 To find out more about this couple and see more of their bus home:

Hope you enjoyed finding out more about this couple and their journey as much as I did! And I hope you’ll drop by their blog to see a whole lot more details about their build.

Since this is my first post of this type, if there’s anything you feel I missed asking, please let me know in the comments. And yes, I am interested in further posts, either interview style or guest posts on a topic that fits the theme here, just drop me a line.

All photos in this post are courtesy of Chaldea & Phil – I added my own artistic flair to a couple – hope they don’t mind! Their blog has lots more photos of the conversion, so definitely check it out to see more!