Ah, I should so be working on my gallery revamp. It’s scary how much time I’ve devoted to it, but here’s hoping eventually it’s a more of  a peek into my mind when people visit my online print gallery. The aim, after all, was to better describe all the work in my gallery more with an emphasis on what it means to me and a little less historic information. Although in a way, that’s what is going on in my mind when I visit historic places. There will always be an armchair historian in my heart.

Anyway, I guess everyone deserves a break, and I’ve had this bubbling on the brain for the past week. The title pretty much gives away the topic. Facebook page owners will undoubtedly be familiar with the little statistic that meets them each time they visit their page, but anyone can visit a page  (regardless if you like it or not) and see how many people are talking about it. It’s not a private statistic at all, but most likely the number matters more to people who have set up pages for their business, hobby or community. And the count is more important than some may realize. It’s not just a statistic to let you know how many people are responding to what you’re sharing. It’s very likely part of the mystical formula known as Edgerank, which decides the placement of the things shared in the feeds of the collected millions of people logged into Facebook every day. 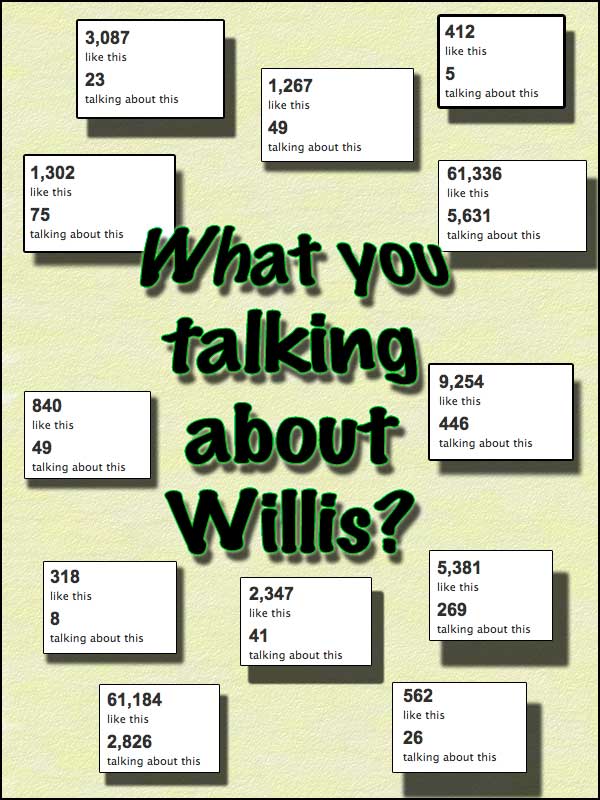 In the graphic above, you can see a random but informal sample of the talking about statistics of a handful of pages that I personally follow. I thought that I had copied my own as well, but I guess I missed them. Rest assured, they are pretty much in line with what you see. Not many people seem to be talking about the things they’ve liked in the past. I’ve read that the average is around 4% of the people who have previously engaged with a Facebook page are talking about it. In general that’s kind of depressing to anyone who has worked or paid (in some cases) to build up a substantial following or even a modest one, but it makes sense. Unless you’re a committed super-fan of something be it a musician, singer, or artist, you probably don’t think about them each and every day. You probably don’t also obsessively hunt for the latest post they made on Facebook.  And this leads to a statistic that has alarmed me far more.

Before the last big shake-up, when I posted something on my Facebook page, the next day when I saw the impressions stats  (not something visible to fans), a good chunk of my following would have seen the photo or post I made in their feed. It doesn’t mean they interacted with it, just that it passed their eyes. I didn’t save any of those stats, but as I recall, it would have been in the realm of 60% to 70% – maybe more if there had been a lot of early interest (i.e. comments and likes) which probably got that item into the old top news view. By comparison, now I’m very lucky if my “impressions” count for a post is in the neighborhood of 10% of the people who have liked my page. Similarly my organic growth has flat-lined in the past months.

Now there’s no end of information about how to game the system. And the general theme of those posts you’ll find around the web is to learn the best times to post for your audience, i.e. when the bulk of them are sitting right there or soon will be so that the news doesn’t sink past the fold. Additionally, there are quite a few psychological tricks to keep engagement up. Have you seen a lot of posts lately asking you to click like if you… Fill in the blank. It could be ‘click like if you love fuzzy kittens playing with yarn.’ Those are very calculated messages. It’s not a request for affirmation, it’s a request to keep that page in your news feed, because all signs point to a likelihood that after a fan becomes disengaged for long enough, they won’t see what you’re sharing any more, no matter how many people are talking about it. Yes, they’ll remain in the big stat that they like your page, but unknown to them, they’ve ceased seeing anything you share. I’d heard this this several times but I’ve finally seen it in action. This week, I saw a comment by a friend in my ticker. The odd thing was it was a comment on a page we both like. I had just finished scanning my recent news, so my first thought was why hadn’t I seen it? I scrolled again, and it wasn’t there. I was already in chronological order so i wasn’t because it wasn’t ranked as important or interesting news. I could see the post on their page but no amount of refreshing brought it into my main feed. I suppose it could be a glitch as I do see pages intermittently that I probably don’t interact with often, but it definitely makes me question things.

Whatever the explanation, in the end, it’s likely very necessary. The average user on Facebook did not join to keep track of the latest offers at the neighborhood pub or the mall they shop at each week. They joined to stay in touch with friends and family, etc. Most of us have probably liked enough business pages that we would never see another post by a friend if all those pages were all active. It’s a balancing act between Facebook users and Facebook pages (which are free) . It could be a calculated way to get pages to pay for advertising to be seen, but there has to be a way to filter noise and Facebook’s strategy for the moment is, I think, to dilute the messages of the various non-people we’ve all engaged with in the past. I do, however, wish that there was at least a way for the people who have liked our pages to decide on their own if they’d rather hear more or less from us, sort of a volume dial if you will instead of an arbitrary formula that decides who wins the popularity contest.

I’d already been considering pushing forward more with an emphasis on the subscriber options added last year. I don’t enjoy the formulaic side of marketing. I have tried and I don’t want to worry about the time of day I post or whether I’ve written a description that will coerce people into responding. I’d rather they see my photos and respond with a comment or a like because it personally impacted them, made them smile inwardly, or what have you. There’s been a Facebook help entry since day one of the subscriber option that people who have pages will later be given the chance to convert the people who liked their page to subscribers of their personal profile, but months later, that option hasn’t materialized. So, I’ve taken to periodically posting to my page to let people know that I’m open to them friending or subscribing to my personal profile. To me, it’s one less hoop to climb through to interact with people who enjoy what I’m doing and maybe just maybe they’ll have a better shot of actually seeing that work. I just prefer a much more organic and laid back approach to things. Perhaps I’d be better off being more aggressive but it doesn’t fit my style at all I fear!

This post was mainly just my chance to verbalize what I’d been thinking about the situation, but if you happen to be one of the people who have liked my page in the past or you are just curious about my art and photography, please consider subscribing to my personal profile on Facebook. I have no immediate plans to cease use of my existing page, but it’s probably where I’m heading unless this is Seasonal Affective Disorder talking or Facebook throws me a new curveball to absorb. I do think I’d much rather interact on a more personal level with the people who enjoy what I’m about, art, travel, etc. with a side of geek.