Ah, it’s been entirely too long since I posted on my personal blog. Other things I could have posted about like the day spent un-hacking my photography site – so not cool. And I’m sure there are some other odds and ends, however, mostly it’s been about trying to complete my re-work of all my print collections. I’m not done but can finally see the end in sight!

Ah, but today I logged in to Facebook and saw that Interest lists have passed from my hack of the regular lists tool into a full-blown feature on Facebook! I had a feeling something like this was coming last week when they unveiled Timeline for Pages. For a brief time right after, when I clicked on the drop down menu under any page using Timeline I saw an option to add to interest list. However, clicking on it led to an error message and then it was gone altogether the next day. Clearly that was an accidental reveal of the new utility.

Today, though, Facebook Feature Lists have been released to the wild! Although the idea of it is not far off the regular friend lists that could include pages and subscriptions, this one is better fleshed out. Previously, if I wanted to add a page or subscription to one of my lists, I could only do it by navigating to the list, clicking to edit the list and then searching for the new page/subscription and adding it there. Unlike regular friends where you could both hover their name in the news feed as well as go to their profile. Well, the new tool changes the game on that one! If you find a page (using Timeline which will be all pages by the end of March) or a person you’re subscribed to, you’ll see this option: 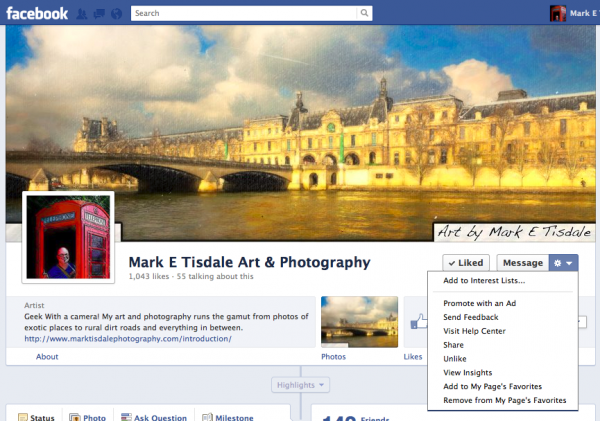 See the photo above, clicking the gear icon on a page or person now shows the option to add them to an interest list. Clicking it you’ll get the option to add them to an existing list or to create a new one. That ease of use alone would have sold me, but Facebook managed to make the new feature a little more exciting! Now I can also decide whether my lists are public or private (part of the list creation process), and I can share those lists with friends.

The neat thing is shared lists are not a one time share. Other people can subscribe to your lists and you are in essence the curator of what is on that list. They don’t decide who is or isn’t on the list, and they don’t have to subscribe to or like anyone on it. Think of it as vicarious subscribing! So, I have created a Visual Arts list for example. People who follow that list will see it in their sidebar and can click on it and see the updates and other items shared by the people I put in that list. If I decide someone needs to be added and add them to my list. It’s by proxy an addition for anyone following my list. The same, of course, holds true if I were to decide someone needed removing.

So yes, very impressed with this addition! I’ve created two lists already and I know for sure I have at least one more in me as I’d already been using the old list utility to keep up with a few subject areas, but now that I can make it publicly consumable, I certainly will. I’m sure there will be an explosion of people creating lists, but it will be interesting to see who holds on and curates their lists to keep them interesting enough for people to stay tuned!

The cool thing is you can create your own lists now or if you can’t be bothered to take the time, find a list curated by someone you like/trust/etc. and let them handle the moving parts of who is included on it.