This is the last post on the subject of Facebook and Edgerank for awhile, but today’s post is something I’ve had bubbling in the back of my head for awhile now. Each previous post on the subject this topic seemed too far off to include and those posts were long enough as it was. Before I go any further, I want to preface this post by saying that this is not an indictment on the things my friends share, just an observation about the way Facebook’s news feed currently operates through my observations of my own news feed, which is, of course, populated with what my friends and pages I like share.

Facebook’s mystical formulas for staying prominent are at least in some small part based on how much you interact with the content from a given page or person. Put simply, if I like, share or comment on a post from person or page x, then the next time I log onto Facebook, I’m more likely to see new content from said person or page. That failing, unless there’s very little news to show otherwise, I likely won’t see much of the future posts made by person or page x. Facebook deems them irrelevant to me when picking and choosing what to show.

To me this is a very simplistic way of measuring engagement. Granted that all things considered, there’s not much else to base it on if you feel the necessity of using such formulas. Facebook simply has no other way to measure engagement with content besides their omnipresent thumbs up or someone actually taking the time to comment or re-share. So, taking a rather modest amount of data in hand, Facebook penalizes individuals who share posts or photos that don’t get much interaction for whatever reason that might be.

The message I see posted on this subject so often is “share engaging content.” Well, when I look at the things getting a lot of likes and comments, what do I notice they have in common? Well, first off they are often served up by people other than the creator of said content. If I had a dollar for all the pages on Facebook that begin with the name Amazing or Beautiful, I think I’d be quite happy – perhaps not wealthy but happy. And almost all of these pages I’ve encountered have tons of followers and are sharing content likely without the knowledge of the person to which those images belong. And they’re not sharing links to that content either. They are copying the content uploading it to their own page and only occasionally crediting the proper person. FYI, even when giving credit, they are infringing on copyright if done without permission. Sometimes the owners of these pages do this knowingly, other times it’s a misunderstanding of the rules of the road..

At any rate, my point is that Joe Photographer or Jane Artist has a very hard time coming up with hit after hit. Sure there are exceptions, but I’m afraid the average is that those individuals are not going to be able to share nothing but jaw-dropping beautiful content that gets a ton of interaction. It’s much easier for the people that are picking and choosing from everything they find across the entire width and breadth of the internet! It’s like they have an army of artists, designers and photographers working for them. You know, except for the fact they aren’t getting paid for their content or even proper credit. 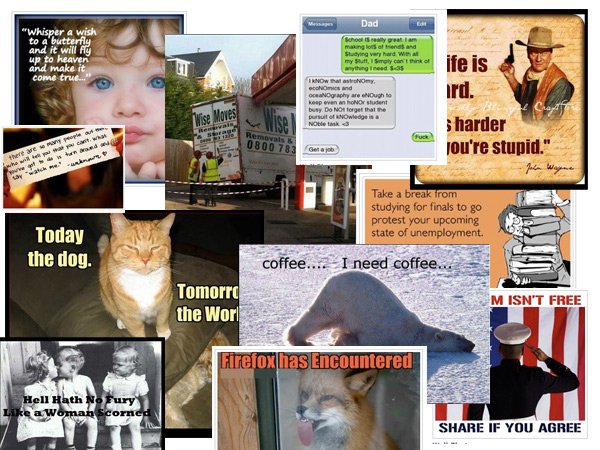 The rest of the content that seems to attract a ton of notice falls into a range of content that I find hard to objectively quantify, but see the collage above for a small sample. It walks a certain saccharine line. Again, a lot of it employs imagery that’s likely used without the copyright holder’s knowledge and has text that begs users to re-share it. It’s filled with jokes, cute comments and life-affirming messages. While some is in fact uploaded by individuals, I find again that a great chunk of it is originating from popular pages that for reasons unknown make it their mission to share such content. It’s a strange popularity contest that I can’t begin to understand!

But all of this boils down to my point in the title, that originality is not rewarded. Joe or Jane Content Creator have a small arsenal of their own material to share. They’ll get beaten down to the bottom of Facebook’s news feed formulas over and over while a page sharing content they’ve found around the internet over and over will rise to the top. Hardly seems like an equitable formula does it?

As I said at the beginning, the only indictment here is on spurious formulas that claim to measure engagement using a relative few data points. I think we’ve all probably shared a joke photo or silly cat picture at some point. We should probably all take a closer look at those items and question where the content originated, but end of the day, my point is that my suspicion is that sooner or later the well dries up if Facebook doesn’t re-think the status quo. I’ve already seen multiple artists and bloggers and other content creators suggest they are re-directing their attention to other avenues or networks after they saw the paid promotion option appear. If enough of those folks leave the building, what are you left with?

I’ve said so much negative in the past few posts that I feel like I’ll start coming across as a downer. Believe me, if I didn’t otherwise like the experience, I wouldn’t waste my time. I don’t have the energy to flog away at something that only brings pain. I do enjoy Facebook for the most part. I enjoy keeping up with friends, some of whom I had lost contact with over the years. I relish getting to cross paths with new people from across the world who have similar interests. My concerns fall more into the realms of the citizen of a community who questions the current state of affairs.