There’s an element of our society that I’ll never understand. Well, there are probably many, but specifically, it’s the people who cook up stories and post them online and wait for their falsehoods to spread. I’m not talking politics or scandals here, but just completely fake stories with no motivation I can understand, often with a photo that is something else altogether but appears to support their story.

There’s a never ending supply of these modern day tall tales. The page that posted this story is not entirely responsible; i.e. they didn’t manufacture it, but one would hope an entity followed by over 200,000 people would make some effort at fact checking. Spreading fake stories doesn’t exactly raise my opinion of such an organization. 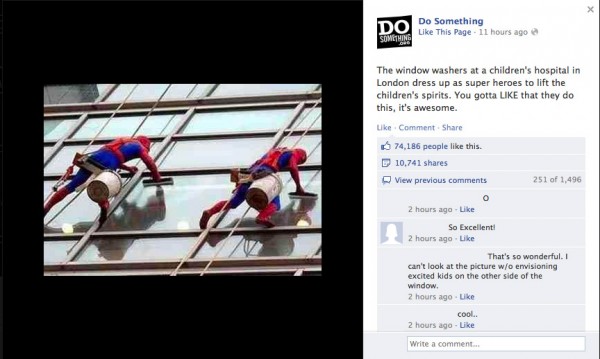 This blotchy photo (obviously saved and re-saved a number of times, a sure tip off for a questionable story) is purported to be of window washers at a Children’s hospital in London. Note all the missing details – what hospital for instance?

As far as I was able to deduce in a grand 5 minutes of web searching is that this is actually a Shanghai Sheraton Hotel! Granted this is taking the word of another website that could be equally misinformed, but the fact that this story appears back in 2008 and the only time I find this photo associated with the children’s hospital story is this year makes me question the more recent version.

I’m surprised for a change that a little more digging shows there’s a kernel of truth. I found this article on a Southwark newspaper’s site from 2010 showing a completely different photo with far more details about a superhero duo of window washers at the Evelina Hospital. Ladies and gentlemen, those are the heroes you’re looking for!

The original post above, though illustrates how quickly faked news spreads. Last night when I took that screenshot, 70k people had liked it, 10k had shared it, and there were nearly 1500 comments! Real news and not-so real news travels faster than ever these days and it deeply bothers me both that there are people who will concoct stories for their own amusement (why aren’t they writing fiction?) as well as a great segment of our populace who makes no attempt at discerning the real from the not.