It’s unusual for me to find myself on the outside looking in when there’s a good joke afoot. I don’t think many people who know me well would suggest I had lost my funny bone. Yet there’s one meme that went viral this week that leaves me completely unimpressed. If you’ve somehow missed this viral piece, an elderly woman in Spain attempted to restore a hundred year old church fresco and failed rather spectacularly. 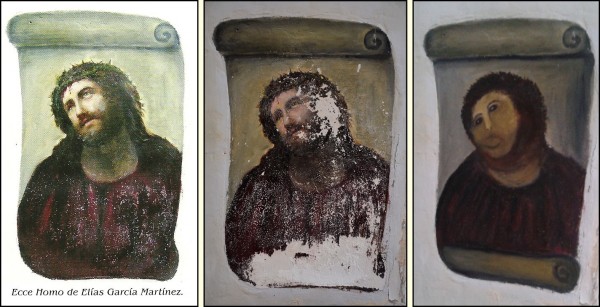 Here we see the fresco as it was, both in the past and more recently, and the final shot is the result of the restoration attempt by 81 year old Cecilia Giménez who was clearly out of her depth. Initial reports was that she had done it without permission, but I’m seeing other statements that she claims the priest of the church knew of her efforts.

This has gotten a lot of press, including the first place I encountered it on the Huffington Post’s Arts section. It was there that they dubbed this an hilarious fail. I was, and remain, flabbergasted by that type of response from any one reporting on the arts. Maybe it would be hilarious if she had painted this on her own easel, but her canvas was the wall where the original painting still resided. Granted the piece is neither ancient on a European scale nor done by a master. The painting was in a small parish church in a tiny village, but it was still an original work of art that had survived for about a century before a well-meaning vandal got out her paint brush.

I was even surprised to find on a few artist message boards that there were still more people who found this funny? Really, what if this was your legacy – a surviving piece or your art in a hundred years time? Still funny? Or what if you were the grandchildren of this painter and you had recently donated money for its preservation? Yes, it happened! Ironic, yes, but to me not hilarious.

Instead of being used as a cautionary tale about why art preservation should be handled by professionals, most of the news sites have taken the humor angle. Huffington did it to the point I unsubscribed from their updates on Facebook as they had flogged the poor thing to death. And each link posted was the same tired story. I have to say the comments by the masses have bruised what is already a sometimes fragile impression of humanity.

I think the most interesting part of this story isn’t the the damaged painting and whether or not the result is funny but the general lax attitude about it. The comments I’ve read across the board tend towards a great deal of sympathy for the elderly woman who took on the task. I really wonder if people would be nearly so forgiving if the perpetrator was a teen? Or would the reaction then be toss her under the jail? My bet is little or nothing happens to Cecilia Giménez other than she gets her 15 minutes of fame. The articles I’ve read in the foreign press have been a mixture of the local authorities being uncertain whether they will press charges. And considering the supporters in her camp, I can understand their hesitance – look heartless or send a message? Which do you do? Assuming she did it without permission, and nothing is done, you’ve sent a message that your cultural heritage is really not that important.

Either way, the experts are set to look at the painting next week and determine if there’s anything left to salvage. Based on the photos I’ve seen and the articles I’ve read, I’m not optimistic. I’ll be glad when this story fades away because my funny bone is apparently incredibly broken on this topic. I guess the world would be dull if we all had the same sense of humor, but no amount of explanation will bring this one over to the hilarious bucket for me.