The One in Which Google Images Angers a Great Many Webmasters

Home » Technology » The One in Which Google Images Angers a Great Many Webmasters
Technology
Share This:

I don’t think Google’s latest changes to its image search has made many friends. Yet, outside of possibly visual artists and webmasters, I’m not sure the rest of the world cares yet. Still it’s been interesting reading all the fuss lately!

What did Google do the rest of you may be wondering? Well, I’m sure a few of you along the way have used Google Images to search for something. Even if you didn’t directly search for an image, you may have seen image results on the first page mixed in between your other results.

Assuming you have ever clicked on those image results, Google historically loaded a larger image over the top of the page where it was found – so you still saw the web page in the background and if you closed Google’s frame, you could see the picture at its home on the web as it were. And the webmaster saw that person as a visitor whether they closed that frame or not simply because the page was loaded in the background. Well, Google has stopped any pretense of showing you that web page. Instead, it loads the full sized image within a sort of slide-show interface on Google itself. 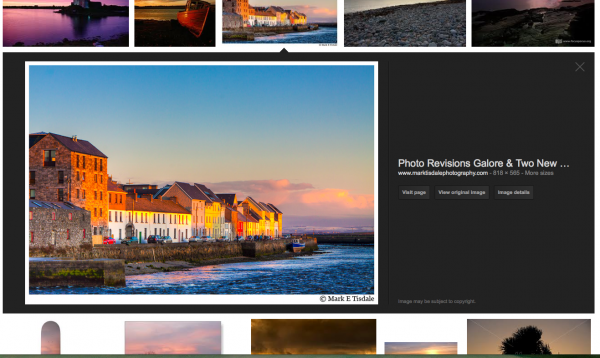 To keep it legal if not ethical, they are loading the large image from the owner’s site, not caching it on their own servers. It was determined through the courts some years ago that Google’s thumbnail cache was fair use, and I think the bulk of webmasters and artists are okay with that use. But you will find opinions all over the place about anything larger. I’m sure that’s why Google is loading the larger version from the owner’s site. The practice, however, is not much better than hotlinking. You see, once you’ve clicked on a larger result, you can use your keyboard arrows to scroll through the results like a slideshow. In essence, Google images has become the world’s largest slideshow using the images from the entire width and breadth of the web! Very literally, they are now the largest scraper site on earth, showing images on their site but using the bandwidth of the website owners around the world in the process.

I guess you can tell I have some moral concerns with this direction. I feel like Google has left the domain of being a search engine and is slowly but steadily becoming a destination site that doesn’t want to send its visitors elsewhere. Better to keep them there and advertise to them. And for a site that big, well, it’s scary for many reasons. And it’s particularly discouraging for those of us that that have Mom and Pop businesses out there who depend on being found through the world’s largest search engine. Have you noticed lately that if you search for something that might have taken you to a site like Wikipedia or IMDB, Google displays the answer in the margin alongside the results? That’s just one of many examples where I see Google flexing its muscle to be the place people stop for the answer rather than getting directions to the answer to their query.

From a user perspective, not having to bounce from site to site may seem great. Who doesn’t like a one stop shop? It might not be immediately worrying, but it concerns me whenever any entity gets that large and all-knowing. Aside from a commerce concern, you end up with only one answer to your questions, the Google approved one. Or possibly the one Google thinks you want?

It creates a place where other voices are obscured if not completely silenced. From a visual artists perspective, I already encounter people who have appropriated my work and state they got it from Google Images as if Google owned them rather than indexed them. This latest move just blurs and muddies those lines for users even more. Notice even the light-grey-and-tiny comment in the above screenshot that the image may be subject to copyright. That’s painting the subject rather less clear than should be stated. Google should state more clearly that unless one knows otherwise, it should be assumed they all are protected by copyright! By not being clear with users on that point, Google has set them up for potential lawsuits.

All my ethical concerns aside, most of what I’ve seen and heard so far is reports from various webmasters that their search traffic has taken huge hits since Google Images rolled out the new search display around January 25th. Some are reporting half their traffic vanished (loading just the image doesn’t normally show in website stats). This is the one area I wait on the fence to see the real-world results. On my own site, I haven’t seen a huge hit so far, but that’s what I expected. Despite being a visual artist, most of my traffic comes from the normal search side of Google, not Google images search. That’s not the only reason I sit on the fence, though. What I wonder is how many of those visitors under the old version never closed the Google frame? I’d like to see stats from other webmasters that show that the bulk of their Google Images traffic previously stayed and visited more of their site rather than that one page where they landed. If they did see those visitors hang around, then I understand their despair, and I may echo it myself soon. But for now, I see it as a hypothetical situation that’s not yet backed by anything but a general uneasiness about the change. Maybe we’ll soon see that those visitors were previously inflating counts but not otherwise contributing to the bottom line?

All that said, don’t get me wrong, I think that Google is behaving more and more as a massive content scraper rather than a search engine. That’s the issue that  concerns me most right now.