Ugh, I spent the past few days battling what was either food poisoning or a side-effect of Zyrtec. I’m not sure which it was but I wish it on no one. Oh well, not a friend anyway. Ha!

Anyway, in the midst of that, I sat up and watched the finale to Series 7 of Doctor Who. Before I get to specifics, I really have to say again how much I dislike the abbreviated half-series thing they’re doing. I felt like the first half of Series 7 was rushed and the second half was just as rushed. I didn’t even realize we’d hit the conclusion of Series 7 of Doctor Who until a few days before it aired. What, the end already? 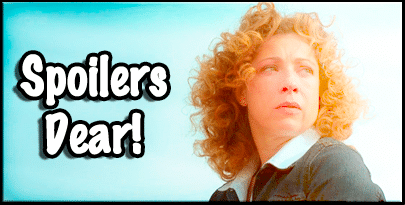 Goodness, where to begin with this episode? And well for that matter the second half of series 7? I liked the character of Clara, but in a way, I felt the conclusion of her story, more or less, was rushed. Compare Clara to River Song, who was introduced to us during David Tennant’s tenure. We got bits and pieces of her back story over years as she became an integral part of the modern Doctor’s story. By contrast, Clara was introduced at the beginning of Series 7 and by its end we already know how it is she becomes The Impossible Girl. And most of that took place in the second half of the series. Maybe there’s more to Clara lurking over the horizon, but right now it feels like a rushed meal. I like the character, the concept of her importance to the Doctor is intriguing, but the delivery could have used some work.

And sigh… Poor River… There’s so much of her history we apparently will never see. I can’t help feeling like they essentially wrote themselves into a corner with her. It’s not often you introduce a character at the conclusion of their life, more or less. Even less so when the time stream of all the other characters is running in the other direction. Think about it, by the time River Song meets the rest of the cast, they have technically known her for ages. Never mind the rest of the story where she turns out to be Rory and Amy’s daughter and the Doctor’s wife. It’s truly sci-fi soap opera material, but it never stopped me from liking the character. River Song is a close second for me to Donna Noble as far as “New” Who companion characters. Such was the power that Alex Kingston brought to River’s character.

I wondered all along if we’d ever see the other part of River’s story. Would we see them travel together? Would we see the moment where the Doctor sees her for the final time and gives her the special sonic screw driver that allowed her mind to be saved to the computers on the vast Library planet in her first appearance in Silence in the Library/Forest of the Dead? Perhaps a goodbye scene better left to the imagination anyway? Now I think it’s unlikely we’ll see that or indeed more of River at all. The Doctor’s farewell to her felt pretty final. The River that the Doctor interacted with in The Doctor’s Name had clearly been in the Library a long time. The Doctor even remarked she should have faded away long ago. So, it appears that River’s finale took part somewhere off screen in the time between Angels Take Manhattan and The Snowmen. Indeed, perhaps any time that the Doctor and River really shared together may exist in a window between those two episodes? And maybe that helps further explain the Doctor’s dark mood in the Snowmen and why he had closed himself off from the world? It wasn’t just Amy and Rory but River he lost as well.

But I still feel slightly cheated where River is concerned. I held out hope at some point, even for just a half series, she’d be the companion that traveled with the Doctor rather than the focus of the plot line. Maybe River’s character was simply too big to be a second fiddle to the Doctor?

Clara, I’ve warmed to, although I was honestly surprised the Doctor found a way to save her. She’s not on the same level as Donna or River yet but she has a unique back story and now a unique relationship to the Doctor having seen all of his incarnations, perhaps even one not meant to be seen.

Which leaves us waiting for the 50th anniversary special in November when we find out more about the character introduced at the end of The Doctor’s Name. John Hurt is the Doctor but one not entitled to the name? I think based on the little we see he’s meant to be the Doctor who sealed off Gallifrey at the end of the Time War that occurred some time between Classic Doctor Who and the new series. Or at least we’re meant to think that. Maybe a game of misdirection or maybe that is indeed who he is? I guess he could be a later incarnation but how then would Matt’s Doctor know who he is? Is Matt’s Doctor really the 12th but he and previous new series Doctors didn’t count one regeneration because of an act he committed?

Sigh, November seems so far away!