After years of mainly being a Mac user, the time had come that I needed a new beast to work on. My Macbook is hardly surplus property quite yet but doing my artwork on it was beginning to become an exercise in frustration. Large panoramas or photoshop files with a lot of layers allowed me to twiddle my thumbs while it thought.

I looked at new Macs and well, frankly, I just couldn’t justify the cost right now. I looked at the various choices under the Apple umbrella and I just couldn’t settle on any of them. A Macbook Pro equivalent to what I purchased years ago was not in the cards.

The portability for my artwork was less important, as well. I’ve come full circle and I pretty much always did my work attached to a large external monitor. So, I ended up getting a little windows machine. I’ll possibly detail that purchase some other time, but for now, this post is more about touchpads.

Specifically after over 6 years working on my Mac, I have become oddly dependent on the built-in touchpad. Despite owning a Mac Mouse, I haven’t used a mouse in years. People with laptops generally don’t consider them to be incredibly accurate devices but I have to give Apple this one. I can do surprisingly detailed work on that tiny little built in touch pad! So much so that I was missing it terribly.

My first attempt at replicating the experience on an Windows 8 machine was the Logitech TK820, and I hate to say I was terribly disappointed. Maybe if you’ve never used a Mac or you’re not using it for detailed work, it would work for you. I’m honestly not sure what to say as it is well rated on Amazon, but after a couple of weeks, I was mostly using a mouse again. After gradually abandoning the touchpad part of the device, I finally disconnected it entirely and plugged in an old Logitech ergonomic keyboard I had. I still haven’t decided if I’m keeping the Logitech combo keyboard and touch pad around. I have used it with my home theater PC a few times since. For that kind of light use, it’s not such a bad device.

So, you may be wondering how that leads us to the rather incongruous comparison with the Wacom Intuos Pen and Touch tablet?? They’re hardly the same product, are they? 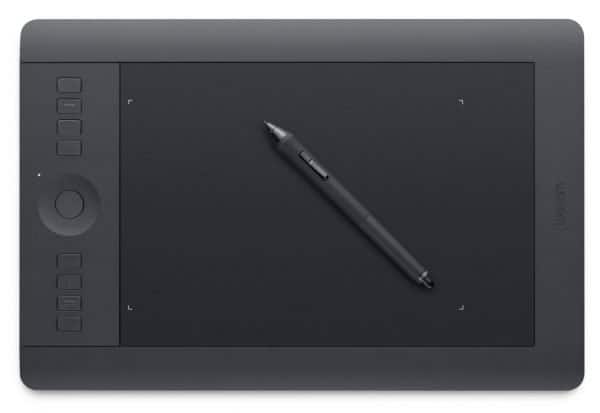 Well, here’s the thing, I have an old Wacom tablet I bought years ago. I liked it, but it was small and not particularly bleeding edge tech anymore. When I started looking around for other touch pad options, I discovered that the newer Wacom Tablets are also touch pads!

I first looked at Wacom’s cheaper intro level ones which were essentially just what I had already but several years newer. And if you’re mainly looking for a touchpad for windows after years on a Mac, that might be perfectly reasonable, but I couldn’t bring myself to cheap-out on the bottom rung of art tablets again. So, I bought the Medium size pro level tablet. And… wow… I’m still getting used to it, but the difference between the tiny tablet I bought years ago and this is really something else. It’s not a Cintiq where you are literally working on the same screen as your art, but I’ve never had that pleasure so this is still a huge leap forward for me.

And as for the touch pad function… I do use it but not as much as I envisioned. Perhaps if I had more desk space to spare but the medium tablet takes up a lot of space so I basically only use it when I’m actively working on my art. Kind of ironic isn’t it?

But if you are coming from a Mac and you want a touch pad that’s as responsive as the one you loved on your Mac, I’d suggest at least trying one of the Wacom Intuos pen and touch tablets. If your uses are less art-oriented, I’d even consider getting one of the small sized intro level ones. The touchpad is as close to a Mac as I’ve seen so far. I’d even consider getting a small one myself sometime to replace my mouse.

Note: In the sense of full disclosure, the product links are affiliate links. If you click through to Amazon and decide to make a purchase, I’ll get a small commission but it doesn’t affect the price you pay nor did it influence what I had to say about these products. Heck, that was hardly a glowing commentary for the Logitech TK820 was it?