My how times change. There was a time when I would have pre-ordered any album coming from RCPM (Roger Clyne and the Peacemakers). It would have been waiting in the mailbox as close to the day it came out as possible. They are, after all, the only band that I’ve followed to out of state shows. Heck, my first visit to Mexico was to see them play by the beach in Rocky Point a decade ago.

I’m so out of the loop now that their latest album, which is getting a good bit of buzz, was released before I even knew it was a thing. Part of me still wonders how that happened, but I think nostalgia factors heavily in that disbelief.

For those not in the know, RCPM is fronted by Roger Clyne, the lead singer of a 90’s band that most would regard as a one-hit wonder, The Refreshments. The thing is one hit wonders are often someone’s beloved band, and that was the Refreshments for me. Their first major-label album, Fizzy Fuzzy, Big and Buzzy, was a fixture in my CD player and I listened on so many road trips at the time that it felt like the soundtrack of my life. The band split up after their second record-label-backed album and RCPM eventually bloomed as a Indie Rock band. I missed the very beginnings of that, too, discovering “whatever happened to”  shortly after their second album released. 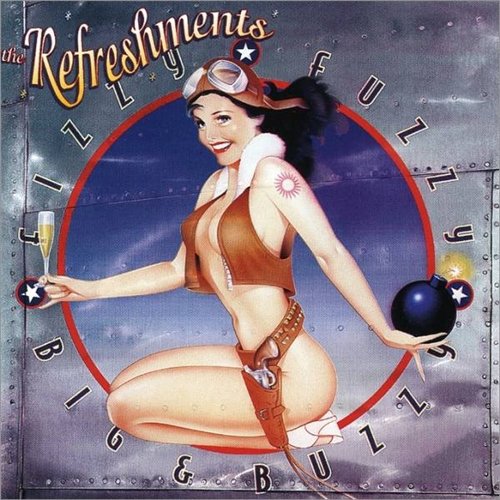 Those first few albums tucked in nicely for me behind the sound of The Refreshments. It was by no means the same music from one album to the next but there was a general theme and sound that seemed to carry through and some of those early RCPM albums are terribly loved.

So, how did I become disconnected? I’m honestly not sure. When Turbo Ocho came out several years ago, I was underwhelmed, but it wasn’t a proper studio album so I put it down to that. It was an experiment in writing and recording an album all at once and I figured it didn’t play as well for me. Some, in fact, I liked a bit more when I heard them live.

A few years passed before Unida Cantina was released and there were some songs on the album that I liked and the general vibe was there, but I have to say that now yet a few years further down the line nothing on the album has clicked with me so much that I could even name a song on that album without looking.

So, with that in mind, when I heard a new album was released this week, I decided to listen to it on Spotify before buying the album. Like I said, something that would have been unheard of in the past for me. And after one listen… well… this album may go to my wish list but I’m not sure it’s going to my bought-it list right now. One listen is not enough to form a solid opinion, no, but first impression is I was underwhelmed. It didn’t connect with me on any level. It felt like listening to the ghost of a band I once loved. There was familiarity but it was sort of like visiting a house you once called home but now someone else lives there. It’s not home anymore.

When I first listened to it, I wondered if anyone else felt the same way I did and I started scanning for other people who were disappointed with the album. I found a few, as you always will, but the funny thing for me was stumbling over a review for Sonoran Hope & Madness, an album that’s now over a decade old and the reviewer at the time called it tired, preachy, and basically something you’d only listen to if you were Nostalgic for The Refreshments!

I had to laugh because that’s one of my absolute favorite albums from Roger Clyne. It’s one of those albums that (when no one is around), I sing along loudly. It’s the sound and songs I find myself missing today.

And that’s when I realized that music is a two way street. Roger and the band have changed over the years but so have I. The reviewer I read who hated an album I loved likely left the road long before I did, but in a strange way, I do understand how they felt.

I don’t know that I’m officially calling it quits. I’m sure if I lived nearby, I’d go see a live show still, but I’m torn on supporting their newer musical offerings. On one hand, being an artist, I know some little part of how much each album sale and each ticket means to them as an Indie band. There’s a possibly nostalgic side of me that wants to support that.

Maybe after a few more listens I’ll have a stronger feeling one way or the other, but I’m honestly not used to having to need an album to grow on me.

Note: Amazon product links are affiliate links. If you shop through them, I get a tiny kick-back and you pay not a whit more!