CoPromote Review – Thoughts On The Numbers

It’s been over a year since I saw a sponsored post for Copromote and decided to give the service a try. It’s one of those apps that in theory is a beautiful idea.

CoPromote is a network of creators dedicated to helping each other reach new and larger audiences.

It hits all the right chords with creatives looking to expand their audience, doesn’t it? After all it combines a sense of camaraderie with an opportunity to get one’s work in front of more eyes.

Well, first off I should say that I have not been using CoPromote steadily for that entire span of time. I’ve toyed with it off and on, but most of the last year was consumed with dealing with my Dad’s illness. So this isn’t a review over a long period of time. But there are some observations that I feel deserve to be put to paper so to speak.

To start, the numbers that CoPromote uses are greatly inflated. It may well be that they have no choice but if you have access to Twitter Analytics for your account, you can see the numbers can be far, far off from reality. Perhaps the company can’t access these counts but if you are using the service you certainly should be looking at them! After using CoPromote awhile I had a sense that these numbers were not grounded in reality but until now I did not have the time to compare them. Here’s one of my most recent “Boosts” from CoPromote for comparison. 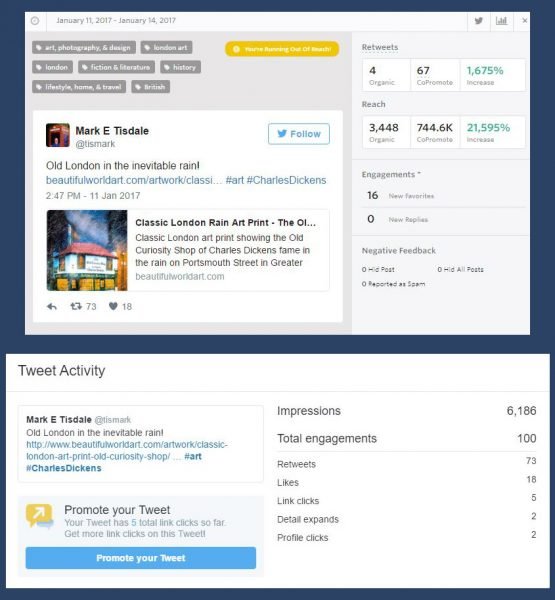 These numbers may not be 100% apples to apples. The CoPromote boost had ended when I took this screenshot, so that side of the equation is an accurate accounting. On the Twitter side the numbers include “impressions” that I would have earned regardless of having “boosted” this post. That means the numbers that CoPromote is responsible for could be even less! Take a look at those numbers, CoPromote informs me that nearly 745,000 people were in that audience. Well, that’s simply adding up raw numbers of followers for each Twitter account. The reality is that only a fraction of that number actually saw the Tweet. And that’s where Twitter’s stats come into the picture Twitter shows that just over 6,000 people saw it! The fraction is astronomically small! Less than 1% of those potential viewers were actually there.

As I said, I have no idea if there’s any way CoPromote can access true viewer counts through the Twitter API but the issue goes beyond poor accounting. Those viewer stats are the basis of CoPromote’s app. Every time a user “boosts” a post they are given credit towards their own boosts. So when I share something with my relatively small 3,000 Twitter followers, the little “reach” counter at the top credits me for that amount. That number has to stay well north of zero if you have hope for others to see and share your content through the app. And in the end, CoPromote ends up having the same volume problem that Social Media in general suffers from. The small fish is quickly drowned out by the bigger ones. So much for camaraderie! 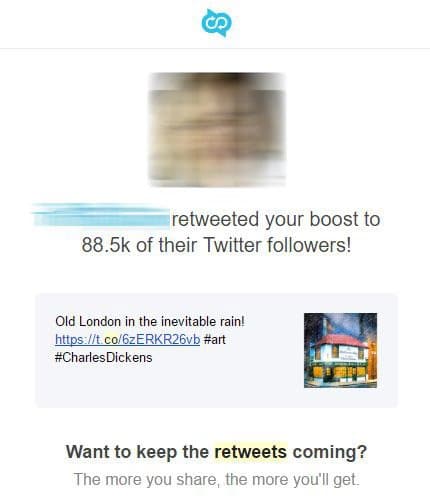 This is just one example from the CoPromote boost in question. Look at those numbers! When that person boosted my post, they used up much of the “reach” I had earned in one fell swoop! And users with that kind of volume are not in my experience uncommon. Now maybe they were responsible for many of the views I actually had but since there’s no real connection between eyes on the tweet and raw followers, it’s impossible to know if there was any real value to be had in that boost.

And at the end of the day, my time is valuable. When I do share from CoPromote, I wade through a lot of content I would never inflict on others.  If you’re remotely picky about what you share, it becomes time-consuming to build up that all important reach number. Granted I may well be getting credit for far more reach than I actually generate, too, but that’s the inherent flaw with this system. You’re rewarded for the appearance of a large user base not actually having engaged followers.

The idea of paying for more reach may be appealing at first blush. In fact, the only reason the Tweet I boosted got so far is because I had used a special promotion to upgrade to a platinum plan for much less than their posted price.

I did not pay the posted $99 or even close to it, but I had an additional 500,000 added to my reach that allowed me to let this particular boosted tweet run its course. And at first I was impressed by the sheer numbers CoPromote showed, the numbers of retweets, etc. But the analytical side of me wanted to know if there was real value there and I’m having a hard time seeing it.

I haven’t wholly jumped the ship but I have moved my plan back to free. I’m trying to work out a system where CoPromote is actually beneficial to me, but honestly after writing this all down in black and white, it’s hard to see… I think if CoPromote could find a way to integrate actual impression data, at least it might be more equitable. Right now a 3am share to 80,000 people who are in bed asleep just has too much value.

Thoughts? What has your experience been with CoPromote? Have you found a way to make it work for you or have you moved on to a platform I haven’t heard about yet?