On a recent post on my art blog, I  mentioned having gotten a new XP-Pen Artist 16 display tablet – similar to the Wacom Cintiq range. So far I’ve quite liked it. The colors are great which was a real surprise. My main monitor is a 27 inch Benq (SW2700PT) which covers close to the entire range of the Adobe RGB color space. The XP-Pen Artist 16 is, if I recall off the top of my head, about 77% of Adobe RBG. I expected the difference between the two to be more striking. I was always planning to do final color correction on my main monitor and still will but I’m happy that the color is so good. Anyway, this post isn’t about my new toy but my screen protector experience with said toy!

I’ve never been a huge screen protector guy. My original iPhone 3G is still clicking around though rarely used anymore. Despite traveling the world with me literally, it never had a screen protector and it has never been damaged. Even if it was tomorrow, that’s still an impressive run. The back plastic is scuffed but that’s it. So until recently my screen protector experience was practically none.

My late father was a big screen protector believer. I never saw a phone of his without one. They were never entirely lined up but they were always there. If I’m honest, it made my inner OCD itch a little to see them. Last year in my effort to help him cope with his diminished eyesight following a stroke, I got him a Kindle Fire because it was kind of like his last Android phone but a magnitude larger. And because he had always been a screen protector guy and he was in a nursing home to boot, I grudgingly applied a screen protector. It took a little futzing but after it was on, I couldn’t tell it was there and I decided maybe it was worth it. That was my first real screen protector experience but it wasn’t bad.

Flash forward to this year, and I’ve recently installed two screen protectors. The first was for a 12.9 inch iPad pro for my mom. I didn’t really give any serious thought to getting one or not. My experience last year was that it was basically invisible and if it helped even a bit, then all the better.  I got her a Tech Armor Ballistic Glass Screen Protector and there was a little bit more pain than with the smaller Kindle Fire a year ago, but nothing dramatic. One stray piece of lint that I had to fish off from near the screen edge and nothing more than a few bubbles to squeegee to the edge.  Considering the size of that screen protector I was really rather impressed with how easily it went on. When I started, I really wondered if I should have gotten a spare in case the first one failed. Although it was intimidating to start, it went on relatively easily. And just like my screen protector experience from a year ago, the iPad Pro 12.9 inch screen protector was virtually invisible. I could pick out the faint trace of it at the screen edges but the picture quality, to my eyes, was unchanged. 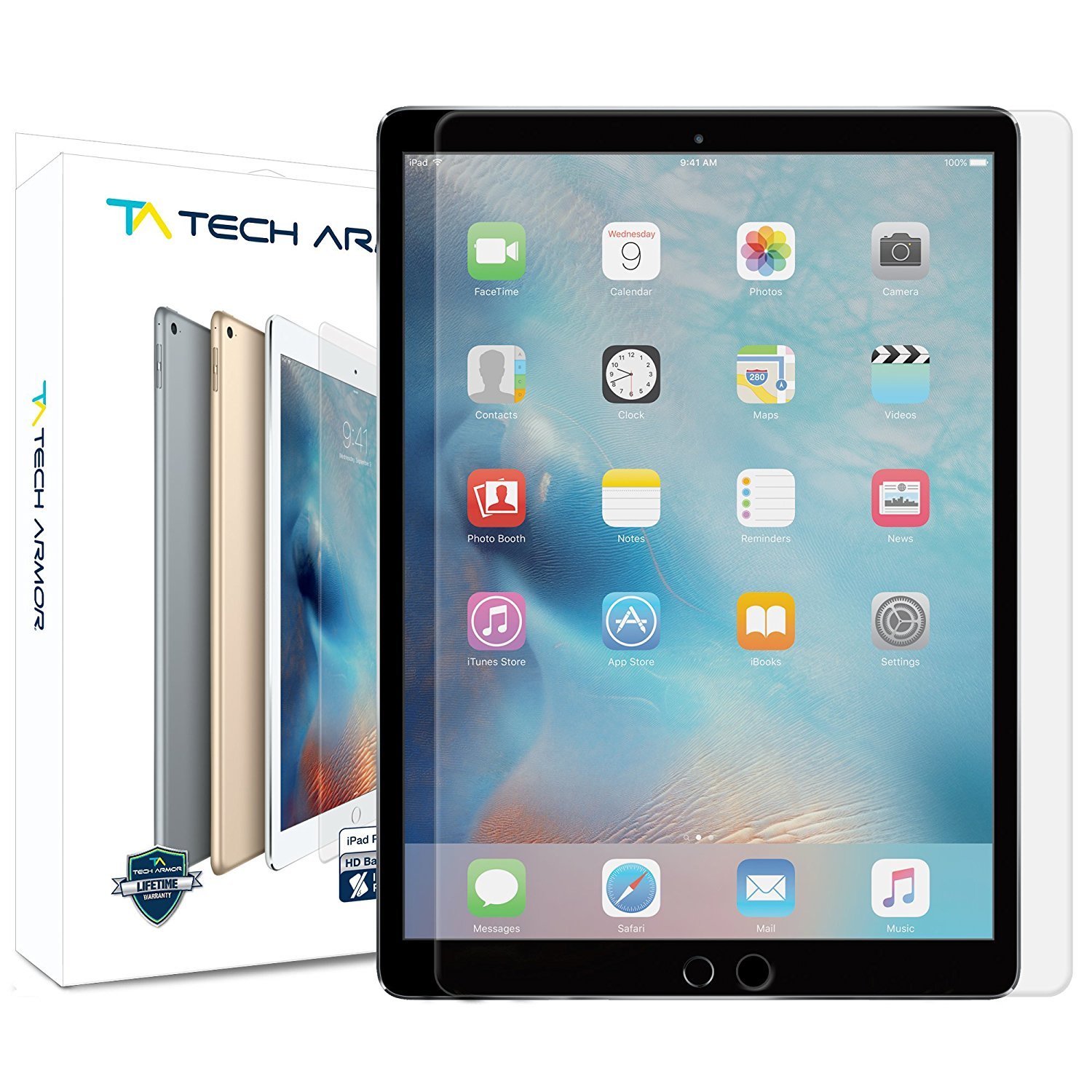 You can sense a but coming can’t you? I wanted a screen protector for my XP-Pen Artist 16. If you saw my old Wacom Intuos Pro graphic tablet, you’d know why. I couldn’t begin to count the scratches in it from three years of use. Clearly I am not light with the pen. Although I have heard that this model was easily scratched to begin with. So maybe I’m not entirely at fault. So I started investigating what was out there. There’s a lot of choice for iPads. When you start getting into more specialty products like an XP-Pen display tablet, your options are much fewer. Now, I should say, it came with one to begin with. In fact it was installed. At least, I believe it wasn’t intended to be removed on day one. Although you’d hardly know it. After a couple of weeks, the edges of it were already visibly lifting. I love the tablet but the screen cover that came with it was either intended to be taken off immediately or it was not designed to last long.

I heard through the grapevine that Photodon basically custom cuts protectors for these types of devices. You can provide them the measurements or if they have the device in their system just pick it and the type of protector. Since I had left scratches all over my old Wacom, I decided to get the toughest protector they had. A lot of artists want a matte finish one to give the feeling of paper for their tablet. I was more concerned about the longevity of my screen. The Photodon screen protector experience was not good. The ordering process was easy and fast. But when I finally sat down to install it, the experience was neither fast nor easy.

So, I’m not sure why the Photodon screen protector for the XP-Pen Artist 16 and the screen protector experience I had with the Tech Armor one for the iPad Pro 12.9 were so far apart. But they were. I struggled with the XP-Pen one for over an hour. I never was able to get all the bubbles out. The instructions suggested that meant a bit of dust behind the protector and included tips for getting it out. In the brightest light I had, I could never see the dust. In fact, for several of the bubbles, just lifting and putting it back down took them out, but every time I lifted one corner, I ended up with new bubbles somewhere on the opposite side. It was a miserable experience. I thought I finally had all the bubbles out, moved it to my desk and plugged it in only to see two more bubbles. That was the last straw, and I promptly removed the expensive Photodon screen protector and binned it. If I find one elsewhere, I’m honestly not sure if I’ll take another chance. The glass on the XP-Pen Artist line is supposed to be “toughened” glass and I know some other artists who use it have foregone the screen protector entirely. I’m on the fence on that subject right now but leaning towards not having one at all. I can safely say I can’t recommend the Photodon one at all. Maybe it’s something about the Artist 16? I’m not sure but unless I try another one I have no way of saying what was the huge difference here.

If you’ve found a great screen protector like Tech Armor for the XP-Pen Artist 16, I’d love to hear all about it! Even more so, I’d like to hear if there are any services out there that install them. When it comes to smaller electronics like this, I generally save the box and I would totally ship it to avoid a repeat of this recent screen protector experience! The only thing I found on a brief Google search was places like Best Buy if you buy the screen protector there which is hardly going to happen for a product like this.

Note: Links to products in this post are Amazon Affiliate links. I paid full price for the products discussed. I’m not being paid to mention them, but if you do purchase after following one of my links, I get a commission from Amazon. It does not increase your purchase price at all.

Note: The people at Photodon contacted me (not based on this post but based on my review on their own site). They have since sent me a screen protector to cover the entire screen not just the active area. Apparently that was not intentional. Because I had so much trouble with the heavier protector they recommended another type altogether. I’ve not worked up the courage to use it but will report back when I do! I did at least want to report that they have done their best to correct at least the problem with the odd sized protector.